Iowa Honey Bee Colonies Increased From A Year Ago 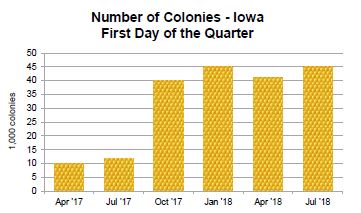 Varroa mites were the number one stressor for operations with 5 or more colonies during each of the 6 quarters surveyed. The April-June 2018 quarter showed varroa mites affected 12.7 percent of Iowa’s honey bee colonies, which is the second lowest level in the past 6 quarters. Other Pests and Parasites, Pesticides, and Other Causes categories saw substantial increases this quarter.