The sclerotized crane fly head capsule is the significantly important as it houses the main sensory organs of the fly. Additionally it holds significant characters for identification and classification of these flies. Characteristics of the crane fly head were some of the first used in classification between the Limoniidae, "short-palped crane flies", and Tipulidae, "long-plaped crane flies". The characteristics of the antennae, rostrum, and maxillary palpus are of primary importance for differentiating between genera and subgenera within the Limoniinae. 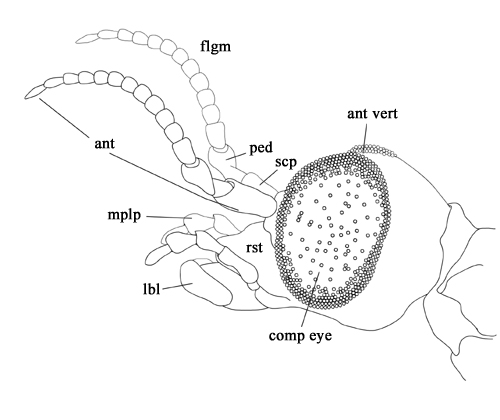 Eyes:
The shape of and location of the eyes on the adult head show a great deal of variation throughout the crane flies. Of particular diagnostic importance are the presence of setulae between individual ommatidia of the compound eye. Their presence is found only in the Pediciidae and are absent in all other crane fly families and subfamilies.


Anterior vertex of head:
The typical condition of the arrangement of the crane fly eyes finds them separated on both the dorsal and ventral margins. There is a tendency in at least the Chioneinae clade for a reduction of the ventral margin by an apparent shift in the eyes to a more ventral position. At its extreme the eyes are nearly holoptic on at least the ventral margin, although the dorsal margin generally remains well divided. An increase in eye area to a holoptic condition is seen in Atypophthalmus Brunetti and a nearly holoptic condition is seen throughout the Limoniinae clade, especially in the species of Libnotes Westwood.
TOP


Antennae:
The antennae of the Lower Diptera is comprised of the scape, pedicle, and flagellum. Within the Tipuloidea all elements show variation in size and shape and are informative at different levels of classification. The shape of the scape and pedicle do not differ greatly throughout the group, with the scape being generally longer than the pedicle (Fig. 1). Exceptions to this generality can be found within the Chioneinae, where there appear subequal, or in genera such as Hexatoma Latreille where they appear subequal in length but are bulbous and greatly enlarged. The flagellum is typically composed of 12-14 flagellomeres that are fusiform or moniliform. Exceptions to this generality are extensive. Total flagellomeres may be greatly reduced to as few as 6,as in Hexatoma or Brachypremna Osten Sacken to 16 or more, as in genera of Pediciidae. Composition of the flagellomeres is equally as diverse and may be seen to be, but not limited to, short or long pecinate, as in Rhipidia Meigen or the males of Ctenophora Meigen, elongate, as in Hexatoma, or composed of compression or fusion segments, such as in Elephantomyia Osten Sacken, Neolimnophila Alexander, or Toxorhina Loew.
TOP


Mouthparts:
As a whole the mouth parts of the Tipuloidea do not differ greatly across the group. Of great importance to identification and classification are the composition of the maxillary palpus and rostrum.

The crane fly palpus is typically comprised of 5 palpomeres (reduced number of palpomeres may be uncommonly reduced to 2 palpomeres). The basal palpomere is greatly reduced in the majority of species and the palpus appears to be 4 segmented. Of taxonomic importance is the terminal palpomere, which is subequal to the penultimate palpomere in the Limoniidae and Cylindrotomidae, but is elongate to twice the length of the penultimate palpomere in the majority of Tipulidae and Pediciidae (subequal in Ula Haliday).

The maxillary palpi are connected to an elongation the head referred to as the rostrum. The length of the rostrum is variable and may range from absent or indistinct to greatly elongate, as in Elephantomyia. The condition of the rostrum may be summarized as less than or subequal the length of the remaining head capsule in Limoniidae (exceptions are Elephantomyia, Helius, and Toxorhina), Cylindrotomidae, and Pediciidae, and generally greater than the length of the remaining head capsule in Tipulidae. The Tipulidae flies additionally are equipped with a prolongation of the apex of the rostrum referred to as the nasus. The presence of the nasus is additionally seen in some Cylindrotomidae.